The city of Akragas , called "the most beautiful city among the hotels for men" by the Greek poet Pindar, was founded by settlers partly from Gela and partly from Rhodes in 580 BC. It stands on a plateau not far from the sea, protected to the north by the reliefs of the Athenian cliff and the Colle di Girgenti and to the south by the so-called Colllina dei Templi and surrounded by the Akragas and Hypsas rivers . Its port ( emporion ) is located at the mouth of the two rivers, in today's seaside village of San Leone.

Between the mid-sixth and the end of the fifth century BC, the city underwent unparalleled building fervor, of which most of the vestiges visible today and a powerful 12-kilometer wall and accessible by 9 doors are witnesses. Starting from the tyrannies of Falaride and Terone up to the democratic period, dominated by the figure of the philosopher Empedocles, Akragas assumes the proportions of a large city-state with more than 200,000 inhabitants.

Destroyed in 406 BC by the Carthaginians, the city must wait for the advent of Timoleon towards the end of the third century BC to experience a new moment of prosperity. During the Punic wars, it was a garrison of the Carthaginians against the Romans who conquered it in 210 BC

During the Roman period, new public buildings were built in the city, now called Agrigentum, including at least two temples, the theater and the bouleuterion, as part of a monumental urban layout that has its fulcrum in the S.Nicola hillock, where today there is the Archaeological Museum. The most opulent houses of the nearby Hellenistic Roman Quarter also belong to this period. The wealth of the inhabitants of Agrigentum probably also depended on the activity of extraction, refining and trade of sulfur, documented by the inscriptions.

In the late ancient and early Middle Ages, the hill of the Temples is occupied by a vast Christian necropolis, both open and underground.

During the Muslim conquest of the Arab, Berber, Spanish, Egyptian, Syrian and Persian peoples, which took place between 829 and 840 AD, it seems they retreated to the Girgenti hill (from the Arab Gergent or Kerkent ), where later the medieval and modern city would be developed.
The Valley of the Temples, inhabited sporadically, was intended for agricultural and handicraft production, such as the ceramic workshops, documented by some kilns. Over the centuries the monuments of the classical city were gradually stripped of the blocks, which served to build the buildings of Girgenti and the ancient pier of Porto Empedocle. 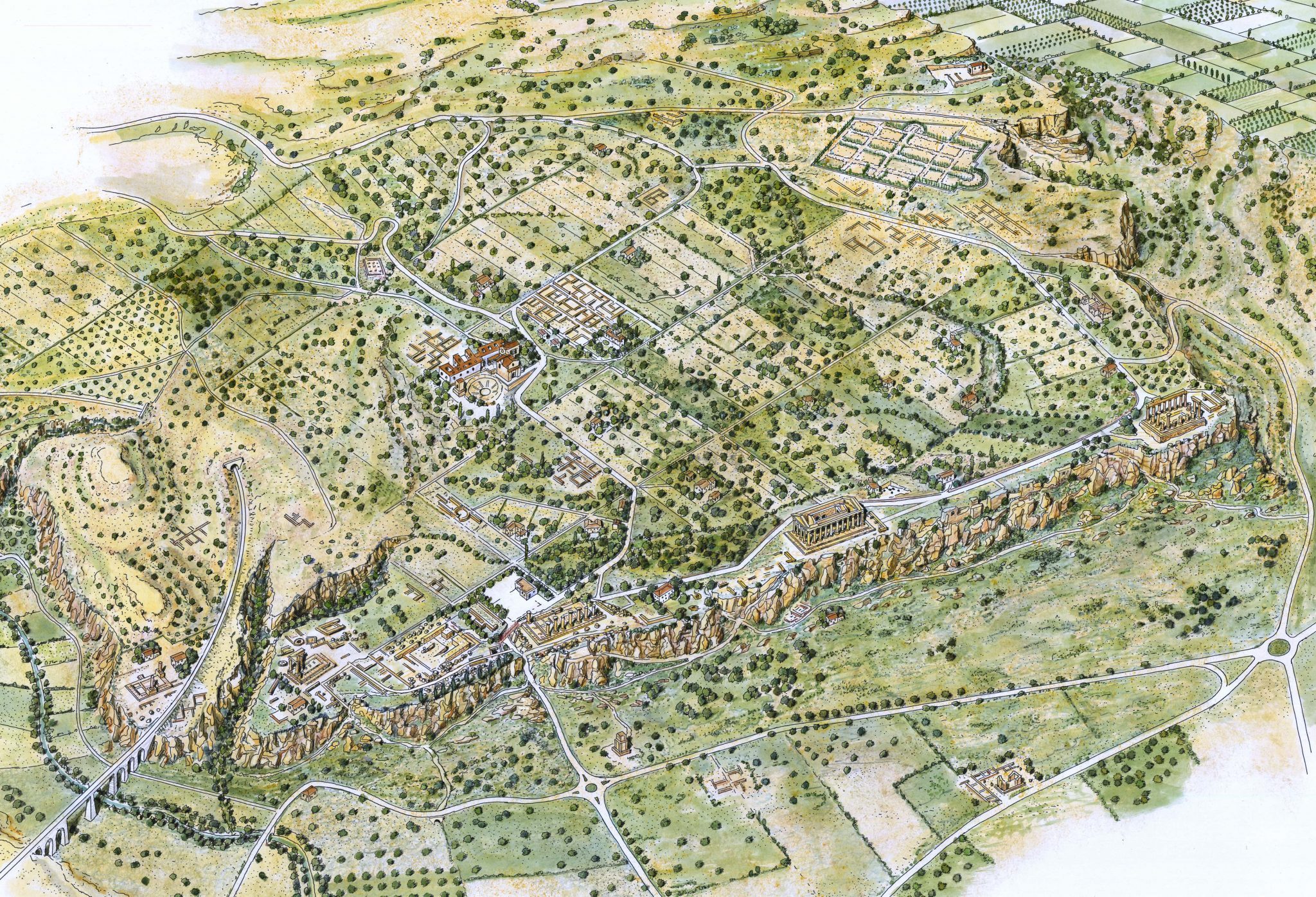 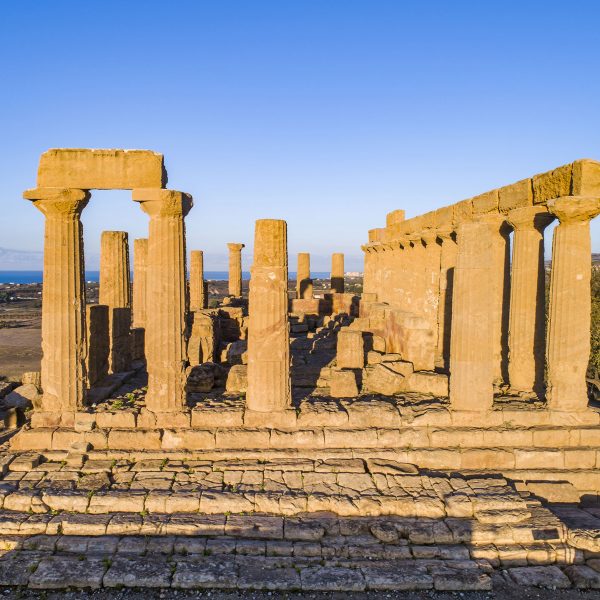 The Temple of Hera Lacinia (Juno) is located on the highest rocky spur of the Valley of the Temples at its easternmost point.
Like most of the temples in the Agrigento area, it is not possible to discern to… 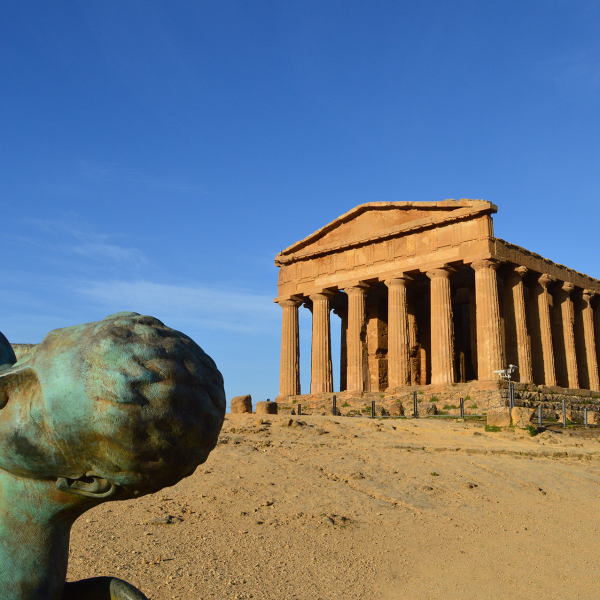 The so-called Temple of Concordia is one of the best preserved temples of Greek antiquity. The building owes its traditional name to a Latin inscription dating to the mid-first century BC which mentions the “Concordia degli Agrigentini”. The inscription was erroneously attributed to… 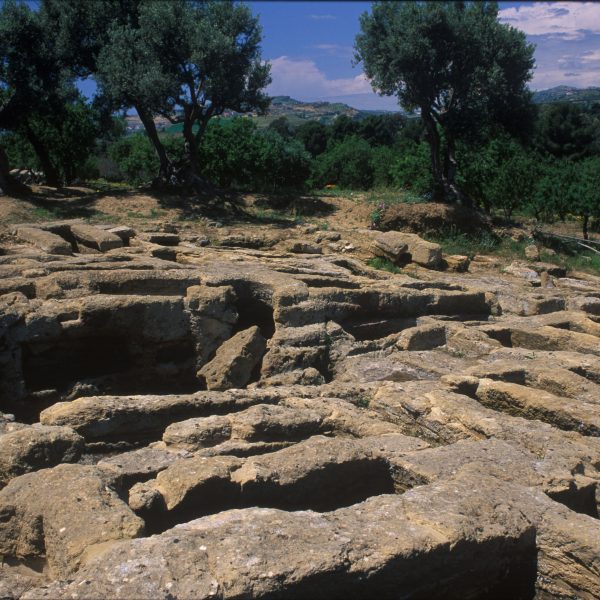 The Paleo-Christian Necropolis of Agrigento dates to the third to sixth century AD and extends across the Collina dei Templi roughly between the Temple of Hera Lacinia (Juno) and the Temple of Heracles. The vast burial ground is divided into various sectors. 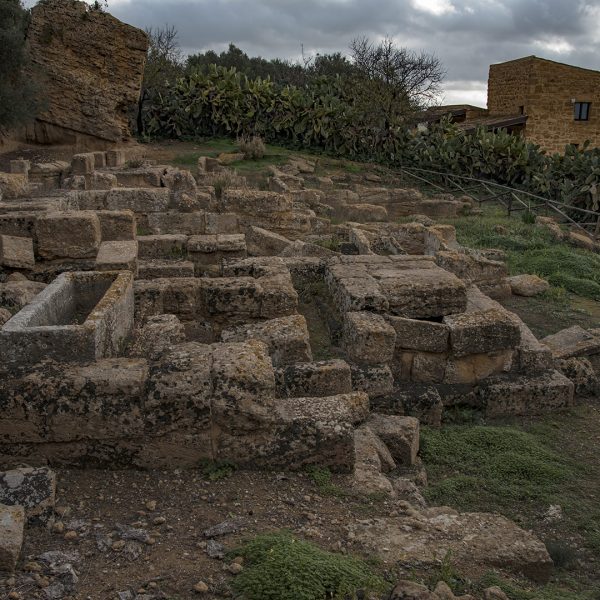 On leaving Grotta Fragapane, by turning right you will reach the rear entrance to Villa Auream while left leads to the Roman necropolis known as Necropoli Giambertoni, formed of limestone chest tombs. Several sarcophagi have been discovered here, such as the famous child's sarcophagus… 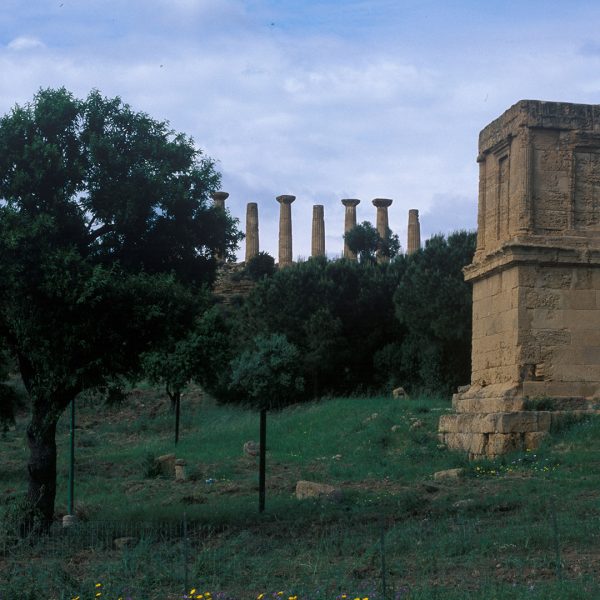 VISIBLE FROM THE OUTSIDE

Theron's Tomb, as it is known, located close to the Temple of Heracles, is a funeral tower dating to the late Hellenistic period which once featured a spire. In fact, the tomb has nothing to do with the tyrant of Akragas who lived… 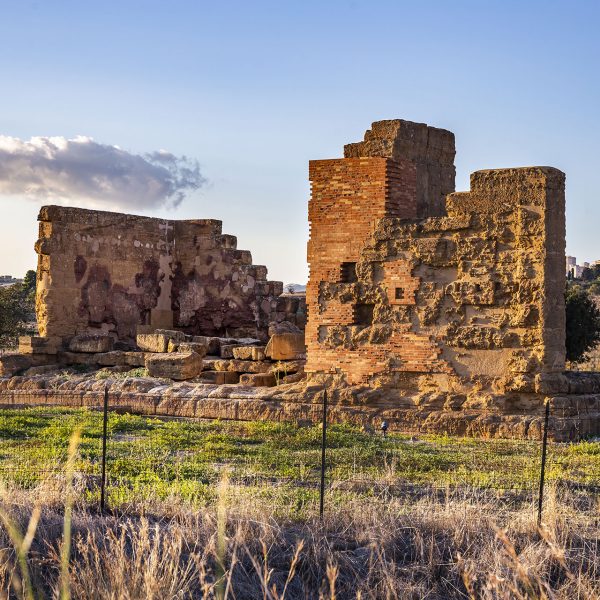 VISIBLE FROM THE TEMPLES HILL OR ON REQUEST

This temple devoted to Asclepius (Greek God of Medicine and son of Apollo) is located around 900 metres south of the outer wall of the ancient city on the San Gregorio plain.
The attribution to the celebrated Cult of Asclepius in… 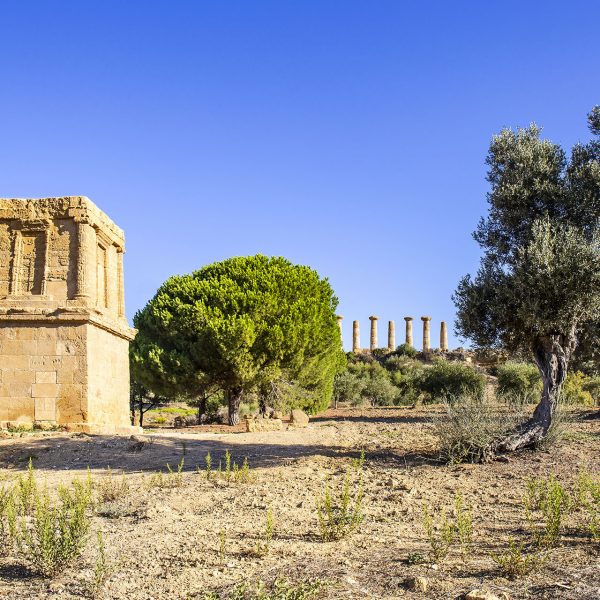 The Temple of Heracles is the oldest Doric temple in Agrigento and was built in the late sixth century BC.
Its attribution to the Greek hero is thought to derive from a passage by Cicero which notes the existence of a… 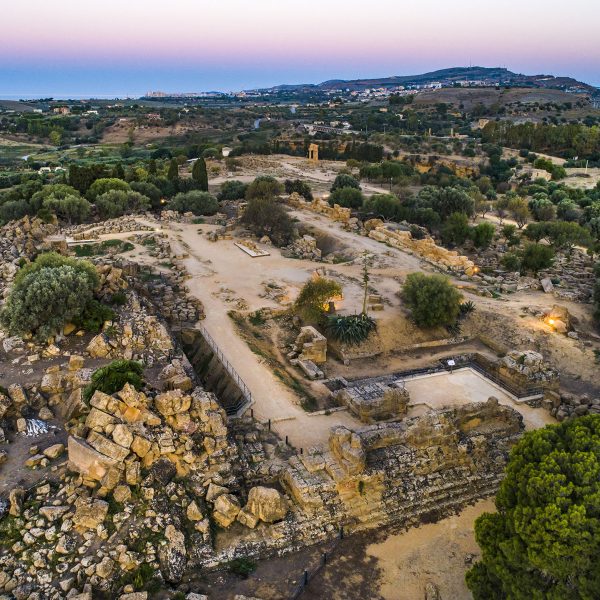 The ruins of the temple of Olympian Zeus bear testament to one of the largest Doric temples of classical antiquity. Unfortunately, the area - likely already damaged by earthquakes in the past - was used as a quarry in the Middles Ages… 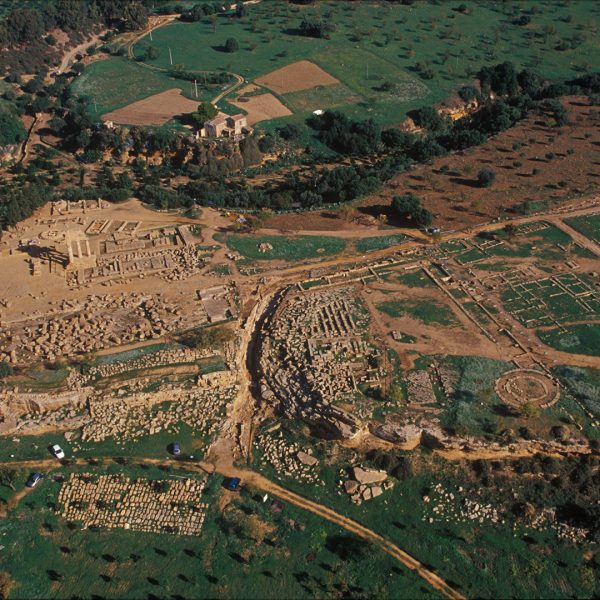 Since its foundation Akragas was surrounded by an outer wall extending for around 12 km. The fortifications used the defensive potential of the rocky outcrops, as noted by the Greek historian Polybius. Nine gateways have been identified along the fortifications, numbered by archaeologists from east… 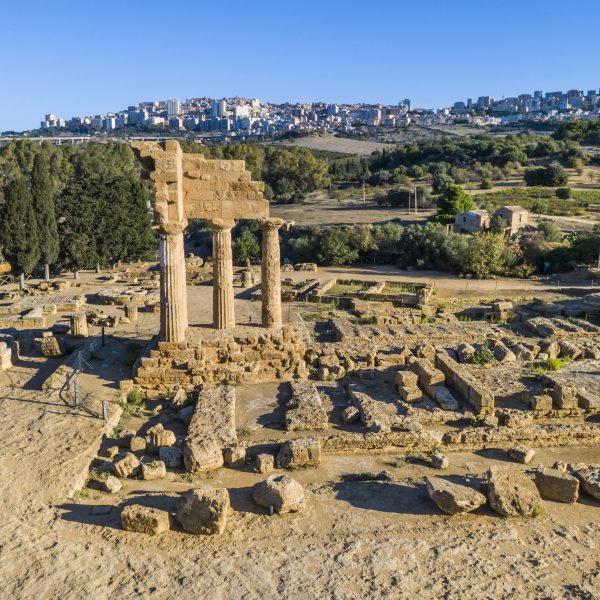 10_Sanctuary of the Chthonic Deities and Temple of Castor and Pollux

The area known as the Sanctuary of the Chthonic Deities is, in fact, the central part of a series of adjacent places of worship devoted to subterranean gods (in this case Demeter and Persephone) located alongside Porta V.
The northernmost part… 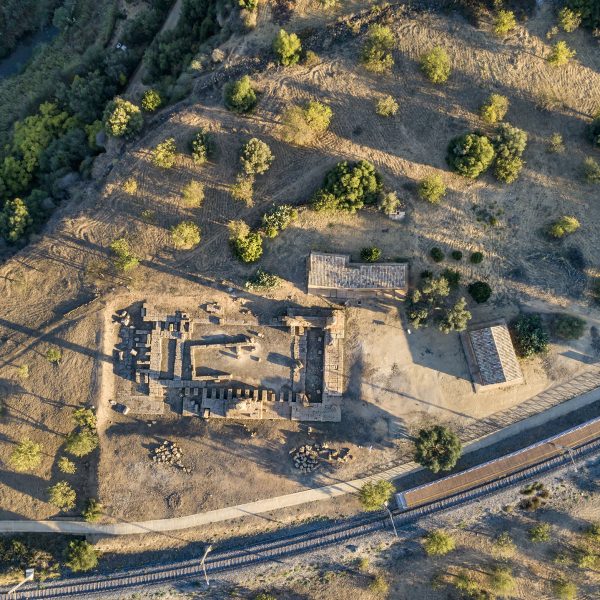 The Temple of Vulcan (Hephaestus in Greek) is located on the hill to the west of the Garden of Kolymbetra which separates it from the far south-west of the Collina dei Templi and the Sanctuary of the Chthonic Deities.
As is… 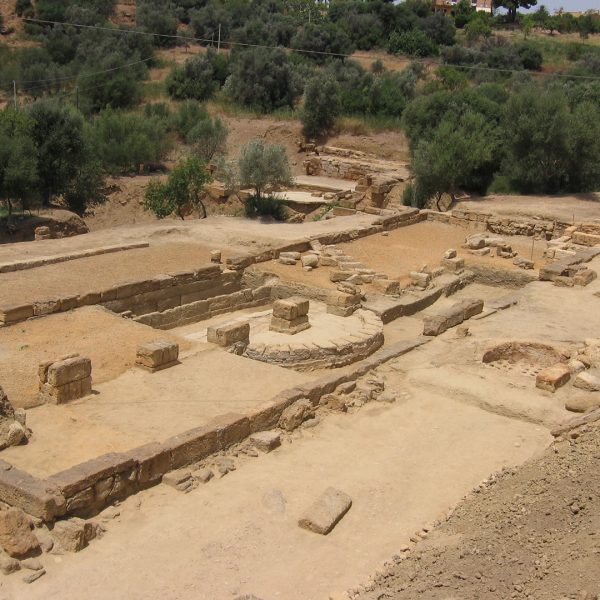 The only ancient gymnasium at the site belongs to Agrigentum, that is, the city during its Roman occupation. In fact, the gymnasium dates to the Augustan age and was constructed in a public space just a few hundred metres north of the Temple… 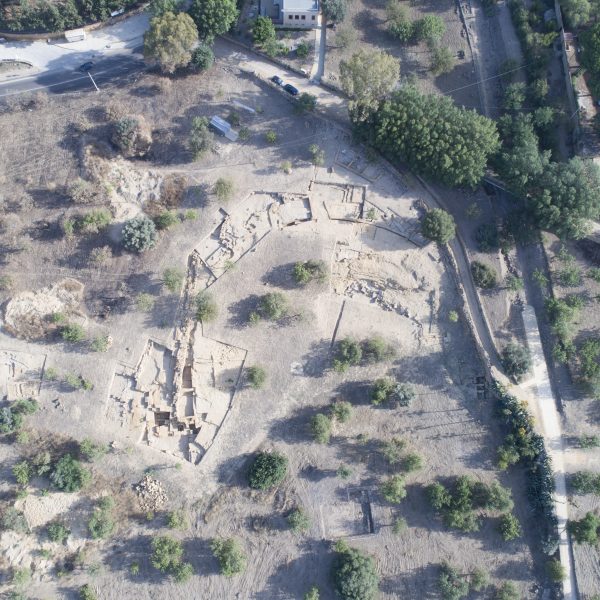 VISIBLE FROM OUTSIDE OR ON REQUEST

The rediscovery of the theatre after centuries of research was an epochal and long-awaited find for Agrigento.
The building was discovered in June 2016 just to the south of the Roman Hellenistic quarter along the southern side of the hill of Saint Nicolas… 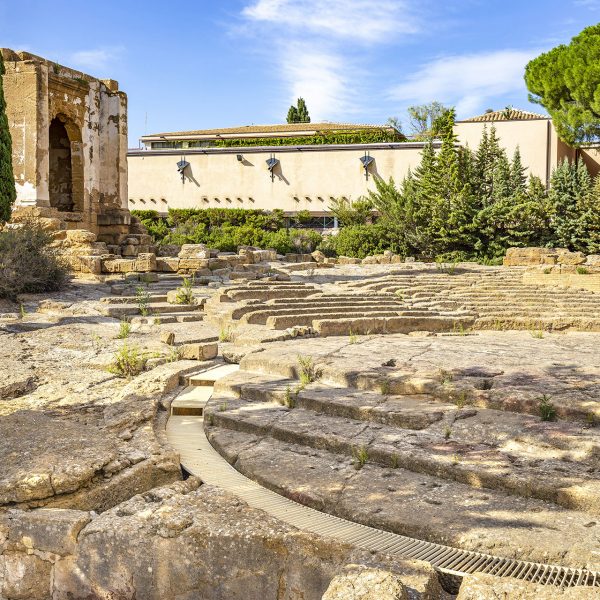 14_The Ekklesiasterion and Oratory of Phalaris

The Ekklesiasterion and so-called Oratory of Phalaris are found on the southern side of the hill of Saint Nicolas, in an area adjacent to the eponymous church and the fourteenth century monastery (now home to the Regional Museum of Archaeology).
The… 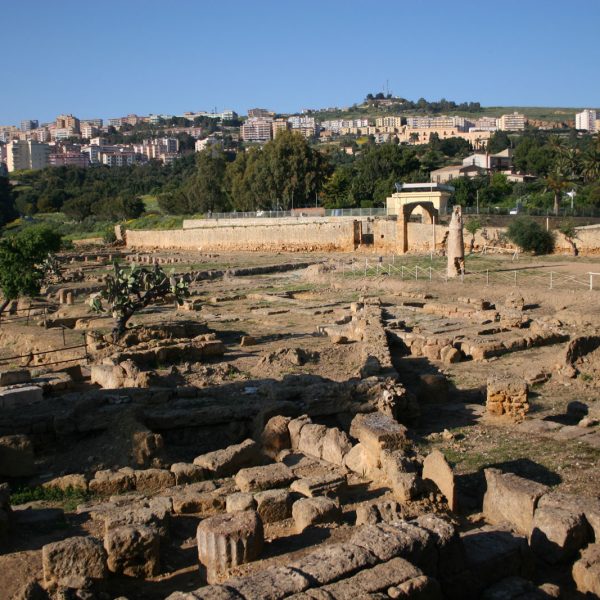 The Bouleuterion located on the northern terrace of the hill of Saint Nicolas was the chamber of the public house of representatives (Boulè in Greek) and was built between the end of the fourth century and the start of the third century BC. 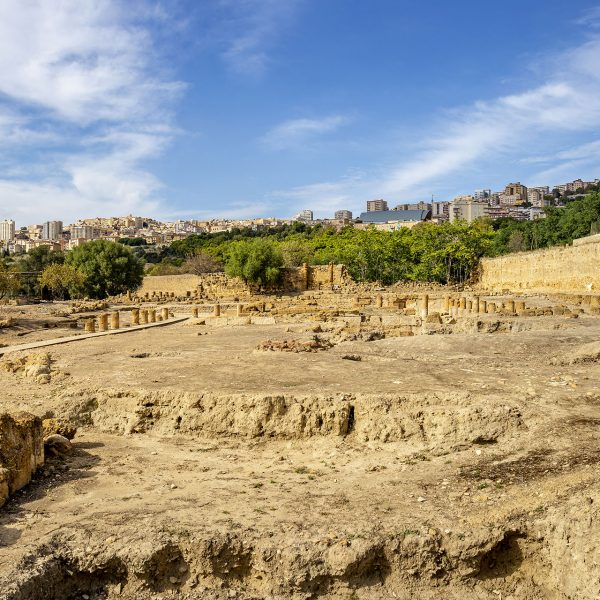 To the north of the fourteenth century Monastery of Saint Nicolas (now the Regional Museum of Archaeology) stands the Hellenistic-Roman Sanctuary, a small temple surrounded by a vast piazza with a portico.
The complex was constructed over two stages, from the second… 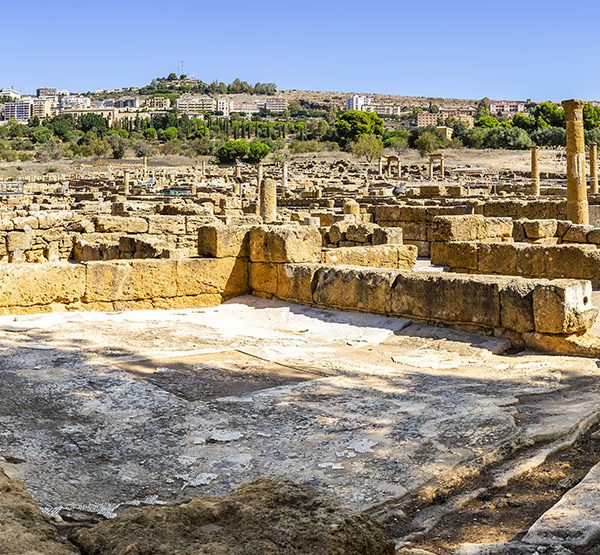 The Roman Hellenistic Quarter, which extends for around 10,000 square metres, is an important testament of the residential culture of the ancient settlement. Twenty-seven houses (domus) located in three apartment buildings (insulae) are bordered by four north-south road axes known as cardines. The living… 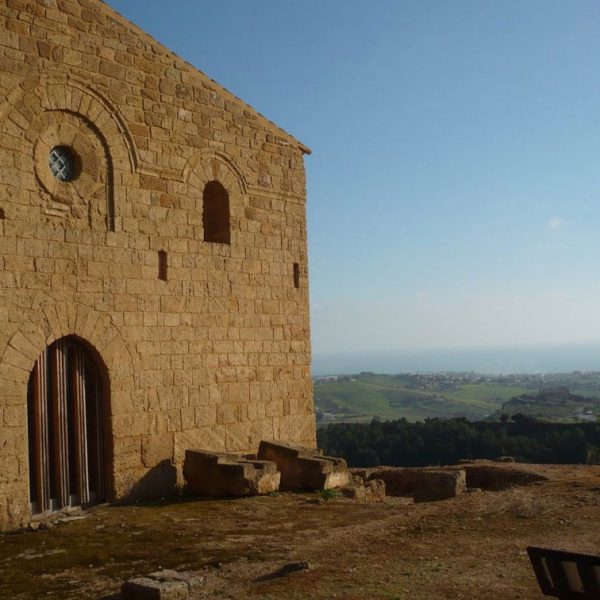 On the eastern slopes of Rupe Atenea, one of the two hills over which the city of Agrigento extends, stands the Temple of Demeter, built in approximately 470 BC.
Today the ruins of the temple have been incorporated into the Church of… 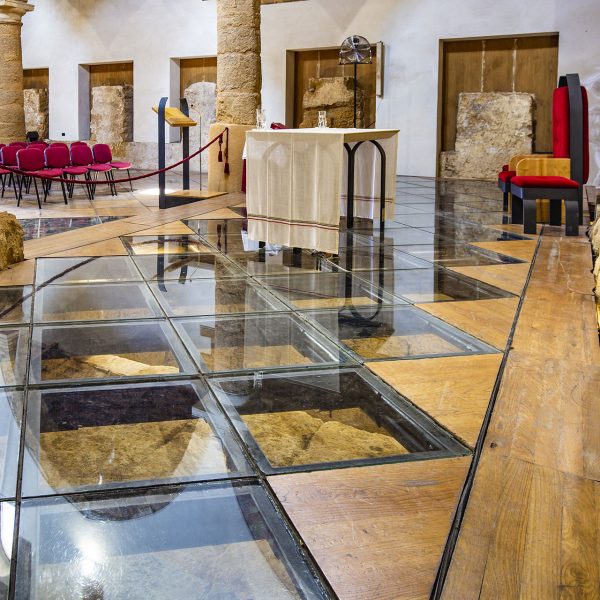 On the hill of Girgenti, one of the two plateaus on which the modern city of Agrigento is built and outside the archaeological site of the Valley of the Temples, the remains of a Doric temple dating to the middle of the fifth… 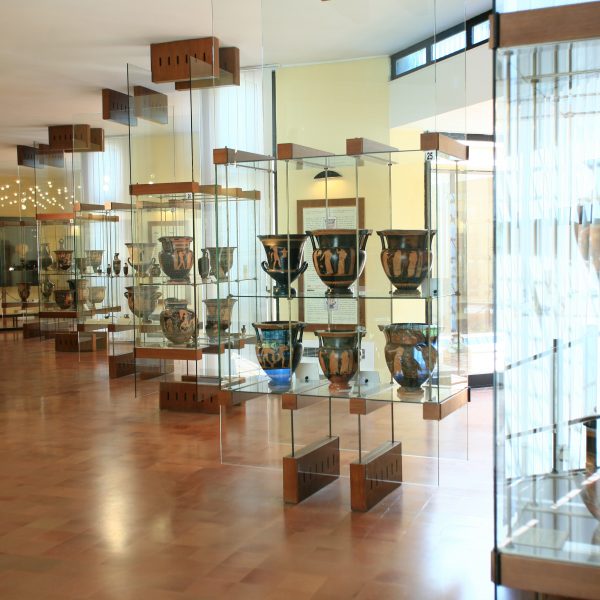 CAN BE VISITED WITH COMBINED TICKET

The Agrigento Regional Museum of Archaeology is named after Pietro Griffo, archaeologist and Superintendent of Agrigento from 1941 to 1968. The site chosen for the museum, the hill of Saint Nicolas, is highly symbolic as it is located at the centre of…