Diodoros – the Almonds of the Valley

“Diodoros – the Almonds of the Valley” are the product of the most representative tree of agriculture in the Valley of the Temples; its fruits are used at any time, and consumed alone or as ingredients of many traditional pastry productions.

Known and appreciated for their valuable nutritional and beneficial properties, a real complete food thanks to its vitamins and antioxidants, “the Almonds of the Valley” are a true unique product, differing in taste and consistency according to the different varieties from which they are obtained, extraordinarily represented in the Living Museum of the Almond Tree in Agrigento. It is a collection which includes plants of over 200 varieties of almond trees and a great garrison of biodiversity of inestimable naturalistic and cultural value.

In Greek literature and classical myths, the almond tree (in Greek, amýgdalos) with its flowers (amygdále) is the symbol of life that is reborn and of hope without conditions: the tree of forgiveness and of lost – and soon found – love.

In the historical context of the Grand Tour, the flowering of the almond tree in the middle of winter – from December to March – colors the canvas of the Valley of the Temples of a snowy white, sometimes spotted with soft shades of pink, and depicts the image of an eternal spring with «as many almond trees as the Milky Way has stars», in the words of Johann Heinrich Bartels.

In a wooden chest that is its shell and in a white and shiny drop which is its unripe fruit, in the almond man has always sought the solution, the sacred, the true beyond appearance, and the divine in religions, myths, culinary traditions and in the pharmacopoeia. 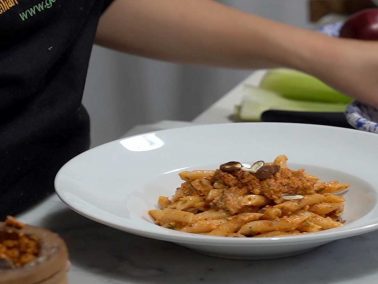